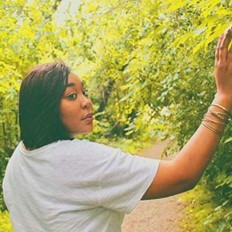 Gabrielle Stewart is the best new talent to come out of Michigan. Growing up, music ran in the family and her uncle was a DJ. The first voice she ever fell in love with was Patty Labelle. Gabrielle Stewart has been singing since she was 3 years old. She is an independent artist who has been seen on American Idol and The Voice.

Right now, Gabrielle Stewart is pushing a blazing new EP entitled “7 Seasons” which has already surpassed one thousand views on YouTube. This project symbolizes Beyonce’s moods on ‘Lemonade’. Gabrielle Stewart has a sound that could be described as mellow, chill, never heard of with a lit vibe. Some of her other musical inspirations include, Solange, Motown classics, and Lauren Hill. She has a strong team behind her to take career to the next level including her partner Ian, and several others. So far Gabrielle Stewart has received over 20k streams across all platforms in many countries worldwide.

Gabrielle Stewart wants to show different sides that resonate with fans and have uncomfortable conversations, showing her authenticity. There is definitely no faking the funk when it comes to Gabrielle Stewart and her talent is a force to be reckoned with!