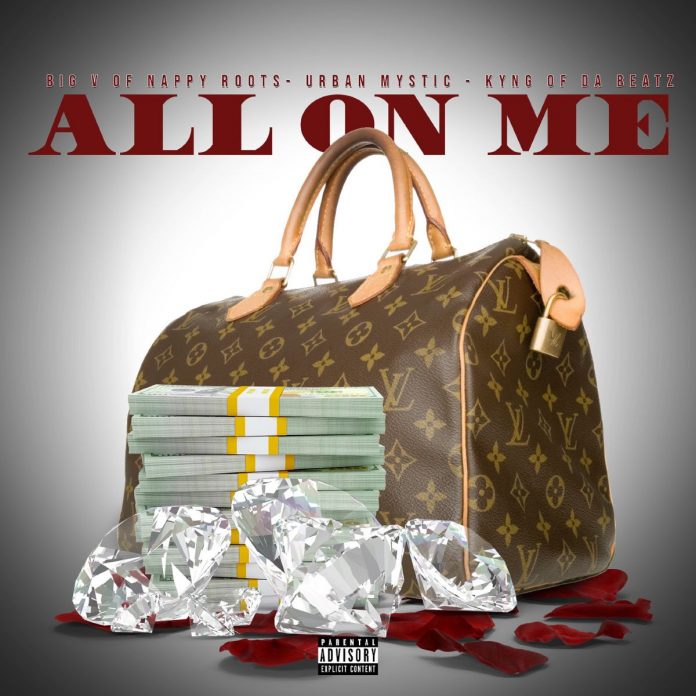 Big V of Nappy Roots accomplished so much during his time as lead vocalist of the group. Multi-platinum sales, Nominations for Grammys, MTV Music Video Awards, Soul Train Awards and AMA’s. Recording with the likes of Kanye, Mark Ronson and Anthony Hamilton. The list goes on. What the group never did though was record a song for the ladies and today Big V gets to check that off of his bucket list with the release of his latest solo single, “All On Me”, alongside Ft. Lauderdale crooner, Urban Mystic. A grown and sexy blend of Hip Hop and Neo-Soul, “All On Me” is a return to the days of romance, according to the  former frontman. An ode to how to treat your Queen.

“The song came about while working in the studio with Mamaz Boy and JayMel aka Kyng of Da Beatz.  I told them that I wanted to do something soulful with the Nappy Roots vibe  but different from anything we ever did in Nappy Roots.” Big V shares. “After we got the basics of the track down, I knew I had to have a real soulful singer similar to what Anthony Hamilton does but again something a little different. JayMel played a track that they had done for Spice 1 with Urban Mystic singing the hook. I was blown away and knew I needed him on the track.”

The rest is, as they say, history, BUT, in the making of the “All On Me” these two discovered a soulful chemistry that brought a full collaborative project in to being that fans can expect in the coming months. Big V also has two solo projects in the pipeline, so be sure to look out for those too.