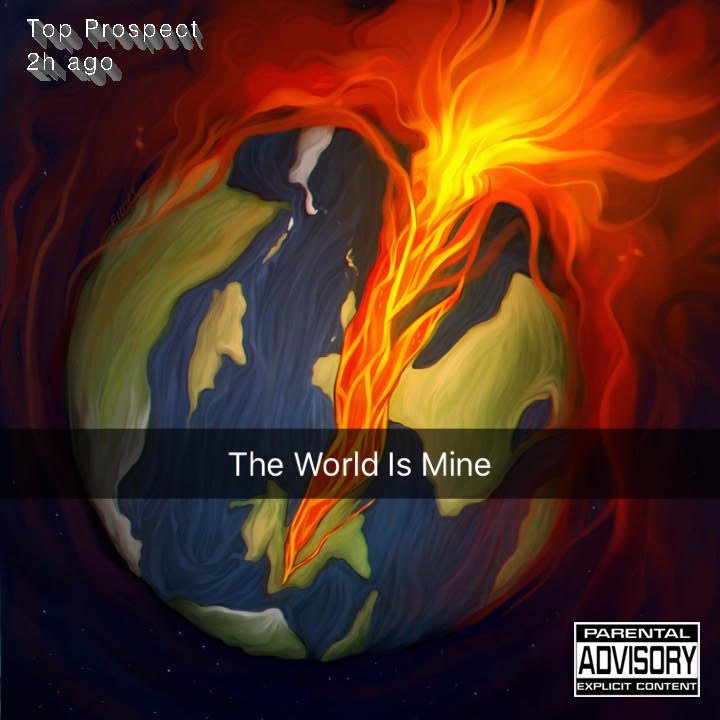 TP’s “The World Is Mine” project is jam packed with hot features from KXNG Crooked, D12, Swifty McVay, Bizarre, King Gordy, Marv Won, and others.

Detroit rapper Top Prospect is a model for grind and consistency paying off.

The first CD he ever owned was Digital Underground “Sex Packets”. He was 9 or 10 years old and “The Humpty Dance” was his favorite song. It was the first album with explicit lyrics his mom let him have, and he’s been hooked on hip hop ever since. He heard Snoop Dogg’s “Doggy Style” when he was 14 and has wanted to be a rapper ever since.

TP got in a lot of trouble as a kid and was kicked out of high school. It all led to an incident where he was shot 3 times. However, he recovered, got his GED and later went to college for audio engineering.

Around the year 2000 he got a menial job working at a car wash in the south end of Warren MI. Almost directly on the corner of 8 Mile and Van Dyke. This was around the time when Eminem was really getting big. He and all his friends were so hype about someone from the neighborhood being so great at what they were aspiring to be. It gave them hope.

One day he was cleaning a car out and it turned out to be Eminem’s. He was shocked that he was sitting in his favorite rappers vehicle. He was the only person allowed to clean his vehicles for many years. He even got to shine up a nice white Yukon that left his hands and went right into the “Lose Yourself” video shoot. That was a proud moment for TP, even it being so small of a detail, he always thought that he was a small part in an iconic video. Around that time he met Proof from D12. He was one of the coolest people he ever met. He even remembers Proof brought up a stereo system and had it installed at the car wash so they could listen to music while they worked. TP always wanted to be like them guys, but at the time he was in a very particular state of mind which made him very confined both in my home and his mind.

When he heard the Devils night album, he knew instantly that he was not different or strange in any way because as soon as he put that CD in the player he heard some of the most relatable rap. He repped D12 since the day Kon Artis gave him a copy of that CD at the car wash. Many years went by and he was still in the same predicaments. In and out of jail, partying and stuff. He knew had had to make a change. Any change would have been fine. But he made one of the best decisions of his life in 2010. He decided to go to college for audio engineering and videography. He excelled in both curriculums holding a high GPA which got him into the international honors society.

He heard online that D12 was accepting submissions from artists one day while he was in school and at the time he had only one song recorded, a beat he made in class. The submissions were to end the following day so he hurried and sent in his only track which had called “It’s About To Go Down”.
He heard nothing for a long time and eventually figured they did not like it. Then one day out of the blue he was contacted by D12s management saying that he was given a green light to make tracks with D12. It was a day he will never forget. He was washing dishing at a small restaurant in Ann Arbor Michigan when he received the email and the patrons in the restaurant heard his excitement from all the way in the back.

Slowly he started making music with D12. Track after track. Video after video. Swifty McVay really played a huge part in shaping his style into what it is – he would even help him with his homework. They starting working in the studio together, And then even shows. He was on stage rapping with one of his favorite emcees of all time. Since that time he has recorded 3 full length albums and recorded countless hours of video which is available on almost any digital platform.