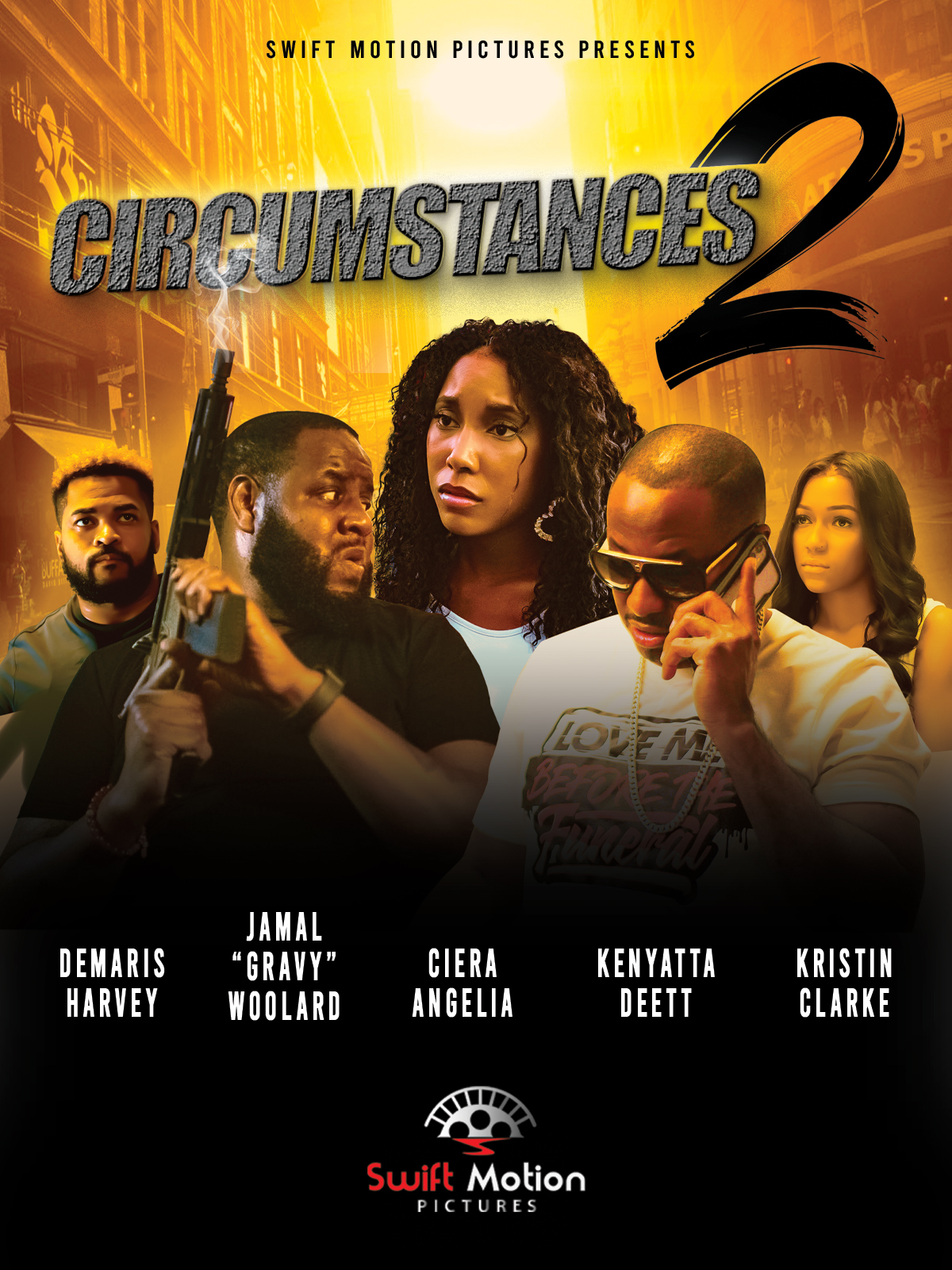 Independent writer / director Swift Sloan is set on captivating audiences with Circumstances 2: The Chase, the follow-up to his fan-favorite film Circumstances which premiered in 2017. The film will stream on Amazon Prime, IMDbTV, TubiTV, Pluto, Roku, ITunes and more, debuting first on Amazon Prime December 22, 2020 via Swift Motion Pictures.

The first Circumstances film follows a man on a fateful journey to save his family from harm, while Circumstances 2 finds us entrenched in a murderous saga, where the streets and the police clash in a frenetic race to riches. Milwaukee native Swift Sloan co-wrote the screenplay alongside Sareta Cheathem, co-directed alongside Beasy Jones, co-executive produced along with his father, Ron Sloan Sr., and also co-produced with Steven Love and Erin McKenzie.

Based on Swift Sloan’s book Motivation II: The Chase, the film Circumstances 2 tells the story of Keyshawn Watson and T.A. Smith, played by Kenyatta DeEtt and Demaris Harvey, who are both living on the edge. Enter bad FBI agent Li Chan, played by Ciera Angelia, and all chaos ensues. DeEtt and Harvey are reprising their roles from the first movie, as more characters enter the fray.

“The cast and crew were phenomenal,” says Swift of the production. “We shot the film in ten days, and once we wrapped no one wanted to leave. The chemistry and unity was incredible. Everyone clicked so well, and we all worked hard to make sure this project was done right. One of the most memorable moments was the warehouse scene. Harvey Hunt, who plays Fox P, is such a live wire in real life. He brought that same energy to his character.”

Circumstances 2 also boasts an appearance from Jamal “Gravy” Woolard, a respected Hip Hop lyricist who rose to fame in the role of Notorious B.I.G. in the major motion picture Notorious in 2016. He followed with a role in Ice Cube’s Barbershop: The Next Cut, and reprised his role of Biggie Smalls in Benny Boom’s 2017 Tupac biopic All Eyez On Me.

“Gravy did a great job bringing the role of Tiahmo to life in Circumstances 2,” Swift Sloan asserts. “His character is a serious guy who’s there strictly on business. When you see Tiahmo, that means you’ve screwed up big time. So let’s just say, you don’t want to see him.”

In recent years, Swift Sloan has put his talent to good work, bringing stories to the screen from a unique perspective. He filmed the documentary of rapper Coo Coo Cal, a cautionary tale about the Milwaukee-based chart-topper whose career derailed at the height of his success. Juggling the jobs of producer, writer, and director may seem like a lot, but Sloan takes it all in stride as he builds his empire with a stellar team.

Swift Sloan recently launched his own film sales agency, Core Exclusive Entertainment, in an effort to assist other creatives in getting their work produced and distributed.

“I want people to see that at Swift Motion Pictures, we’re putting our all into these films. It takes much patience, a team, and dedication to do what we’ve been doing. I think that our supporters know and appreciate that, and we are grateful for each one of them. We have many projects in development, from movies and documentaries, to docuseries and a reality show. Our goal is to continue telling stories that entertain and to deliver some with meaning. Be it fiction or non-fiction, all of our pieces have gems, and touch on perspectives of the environment in which myself and countless others have inhabited.”

Stream Circumstances 2: The Chase now on Amazon Prime here: https://www.amazon.com/dp/B08QCNXLMX
Catch the film on all other streaming services this holiday season!