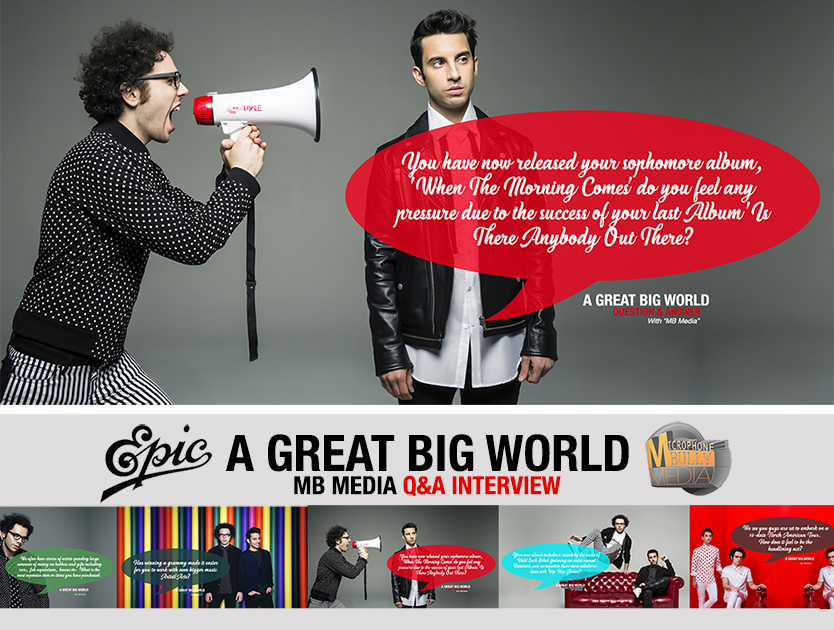 The Grammy Award® winning multiplatinum pop duo A Great Big World, Ian Axel and Chad King, are set to play major markets across the East Coast and Midwest, beginning March 17 in Annapolis, MD at Ram’s Head On Stage through March 28 at Skyway Theatre – Studio B in Minneapolis, MN But before they head out on tour they took the time to sit down with MB Media for a brief audio Question And Answer interview.The Group speaks on everything from the success of their Grammy Award winning hit single “Say Something” the pressure that comes along with creating new work and big purchases they have made over the years.

Question 1:
We see you guys are set to embark on a 10-date North American Tour. How does it feel to be the
headlining act?
Question 2:
Your ‘Say Something’ Music Video featuring Christina Aguilera as of this moment has 321,500,480 views on youtube. When you were creating the record did you ever dream it would have such a major impact?
Question 3:
Has winning a grammy made it easier for you to work with even bigger music Artist/Acts?
Question 4:
You have now released your sophomore album, ‘When The Morning Comes’ do you feel any pressure due to the success of your first Album ‘Is There Anybody Out There.’
Question 5:
Your new album includes a record by the name of ‘Hold Each Other’ featuring an artist named Futuristic, can we expect to hear more collaborations with Hip Hop Artists?
Question 6:
We often hear stories of artists spending large amounts of money on hobbies and gifts including cars, ?sh aquariums, houses etc. What is the most expensive items or items you have purchased.
Question 7:
Last but not least, what is one thing you would like your fans, our readers and anyone else to know about you?