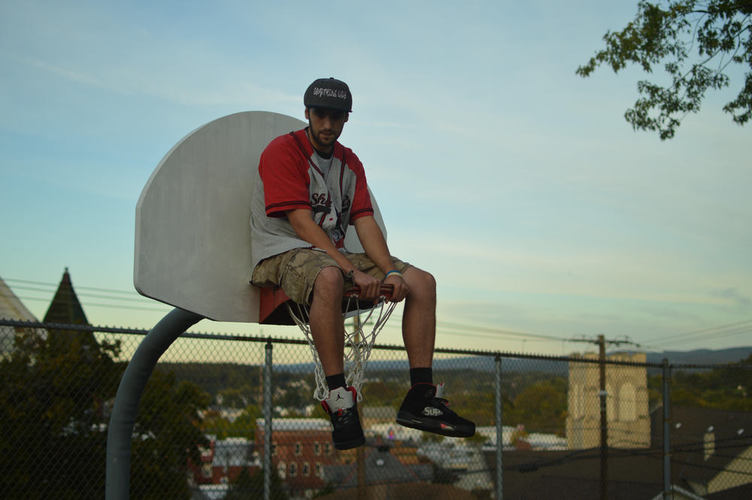 Izzy Strange swings hard and connects to fan’s ear drums with his second album, “A Good Day 2 B The Bad Guy”, accompanied by an esteemed cast of features. –

Izzy Strange may be from a virtually unknown town but rest assured, his drive and aim are set on becoming a household name. He’s come a very long way from his Strangers With Candy days, performing alongside his brother. Since his first solo endeavor, “Dinner With My Enemies”, Strange has continued to build upon his relationships with contributors such as Nate Fox . After DWME, Izzy began to really self-examine Hip Hop and himself as an artist. This soul searching would become the beginning stage of his latest work of art, “A Good Day 2 B The Bad Guy”.

To begin, Strange tapped into a set of artists he looked up to and/or was influenced by at some point in his career. Doing so landed some big features in Mick Jenkins, Blu, Open Mike Eagle and Eligh. Keeping true to the underground indy scene however, he would also go on to work with Red Pill, Tahlyn, Mike Incite and DJ Halo.  Instead of crafting instrumentals for the album as he did with DWME, Izzy would look towards frequent collaborator Nate Fox and Casa Nada to craft the anti-hero sound. This allowed him to fully focus on writing, experimenting and crafting a wide variety of tunes for AGD2BTBG.

Those familiar to Strange’s music are aware of his unique flow and delivery. With this new body of work, it’s safe to say he’s found his sound and is fully comfortable behind the mic. This holds truest on songs such as “No One But Me” (Mic Jenkins) and “At Home” (Blu). Strange holds his own ten fold among the two Hip Hop heavyweights. He also drops some great radio records in “Real Love” and “Might Slip” with the aid of songstress, Tailyn.

AGD2BTBG is riddled with emotions and feelings yet doesn’t overwhelm the listener. –

Right when it gets deep, he flips things into full-on Hip Hop mode. Listen to the first two tracks, “Everybody Got A Story” and “Making Movies”. Right when you think this album is from a personal perspective, he drops knowledge with “On One” and instantly gets your head nodding with “No Commercials”. He has solid singles but what should be appreciated the most is that the album is a full-bodied presentation. It was created to be played from start to finish unlike many albums of today. Definitely worthy of your attention, please take some time out your day to soak in the sounds of “A Good Day 2 B The Bad Guy” down below.