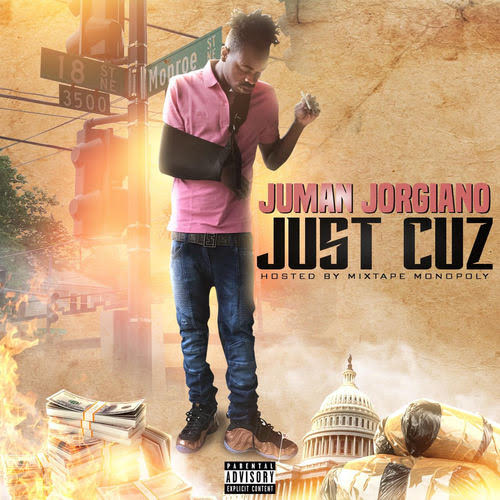 Known for his signature cast on his arm, Juman Jorgiano reps D.C. to the fullest with a chip on his shoulder. But while rapper Juman Jorgiano has gottten a quick buzz off his mixtape Just Cuz released on Spinrilla August 23rd, he’s not stopping there.

After his continued beef with Young Gleesh, Jorgiano moves past the drama with a focus on his new music to get the fans ready for more releases like his video “Fuckin With Me.” This new release follows up “How We Came” which picked up on Philly mainstay HipHopSince1987, Florida site CitrusRaps and European site WkndTV.

“I been doing it since 2012, but I just started to take it serious a few years ago and me and Young Gleesh started recording together, I ‘ve been getting a lot of good feedback just on the strength of me putting out my own music,” Juman Jorgiano explained.

When asked about his signature cast and how it came to be prop in his music videos, Juman explained that he really did hurt his arm, but that the cast may stick around after getting so much attention.

“It’s slowly becoming my thing – so many people are asking… just know that joint ain’t really going anywhere,” Juman Jorgiano said of his signature cast. “My arm is really fucked up and because its still kind of personal, I want to keep it to myself, but there’s a lot of people out there that’s stuck because they have a physical disability or ailment and I want to be the one to inspire them to keep going. Ain’t nothing stopping me and my music at this point.”

Leading up to the end of the year Juman Jorgiano is looking to continue growing his buzz in the DMV and is planning on releasing the single “Music, Money, Murder 2” the sequel, which will also have an accompanying visual.

“It’s a rough city basically, our rap scene basically coming up and people getting signed out the DMV, but its a lot of personal issues going on, where there’s a lot of artists that can’t click up because of various issues,” Juman said.