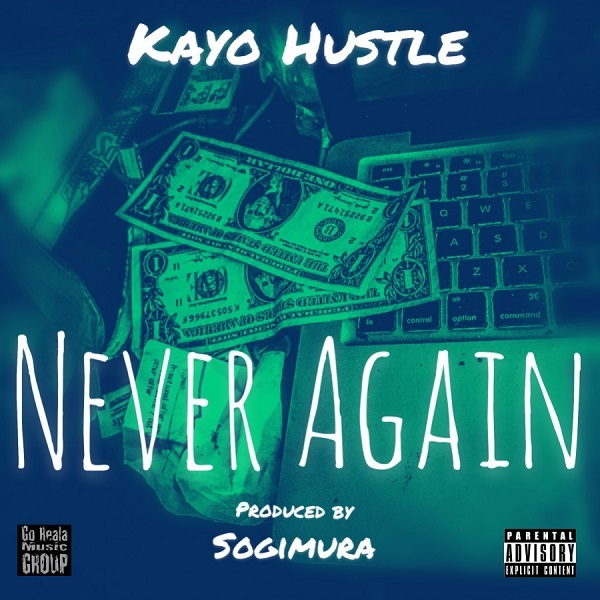 SAN DIEGO, CA – Reality Rap takes center stage on the new single from West Coast artist Kayo Hustle. “Never Again” is a rapid-fire flow of witty words and clever lyrics from this veteran hit maker. The bouncy beat will have listeners bopping their heads and moving their feet as they tap into the story that Kayo tells through this hot new track.

“It was inspired by the fact that I was broke and I woke up one day mad about it and said, ‘Never again!’” Kayo said. “So I got up and I did what I needed to do to get out of that slump. Sometimes we all need to wake up and make a change in life, and it takes that conviction to say ‘Never again’ to really get us going.”

The new single is the latest in a long line of successful music from Kayo. Starting at age 14 opening for comedy acts in San Diego, Kayo has developed his sound the hard way by bouncing new ideas and vibes off live audiences and gaging their reactions. But that baptism by fire has allowed him to learn quickly and make adjustments on the fly, which in turn had helped him to develop into one of the most seasoned and well-rounded rappers in the game today.

“One thing that really sets me apart from anyone else is my experiences,” he said. “I don’t really rap about things I don’t know or haven’t gone through first hand. I try to simulate my music so it has a meaning or some kind of motivation or insight. I’m not gonna say I’m your ‘Average Joe,’ but my story can connect with anyone from the streets who is trying to make it and live their dreams. Not many people talk about that gray area that bridges the gap between having nothing and getting to where you’re living your dreams. And at the end of the day, I want my music to be known for helping people who are going through something. They can listen to my songs and let it help them through, or motivate them or give them insight into how to do something.”

Kayo said he refers to his music as Reality Rap because he used to write the songs to himself as a way of motivating himself to overcome some of the worst situations one could imagine. Through that process, he created hits like “True Story”, “Enough”, and “Mill Sh*t” – which helped put him on the map in the early and mid 2000s. It also paved the way for his first record label, On Fyre Entertainment (started in 2003), under which he produced and released more than 15 artists and their projects. Since that time, he’s made more projects and secured distribution from Empire for his new label imprint, “Go Reala Music Group” (started in 2012) and has given out great albums such as “Black Friday”, “Lifestyle of a Hustler Vols. 1 & 2”, “XVI Khronicles” and “Executive Orders”.

Kayo Hustle is an artist to pay attention to and has many things planned for the future. He has a heap of new singles to be released, a new album to drop on his usual release date, Black Friday, and tons of new merchandise for his “iGot Hustle” brand. As he would say in his infamous words — #StayTuned.

To listen to Kayo Hustle’s music or to follow him on social media, please visit: