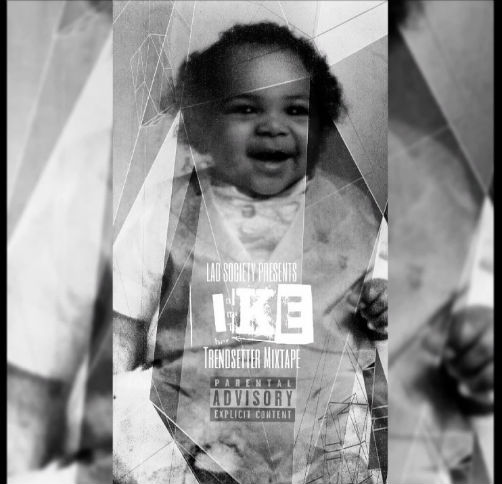 Independent Rap juggernaut IKE (Illest.Kid.Ever) is the CEO and founder of LAD (Living The American Dream) Society. He is a determined emcee who’s ready to take the music world by storm. His clever lyricism, magnetic delivery, efficient wordplay and irresistible personality has already earned him acclaim among Hip Hop aficionados. He is wise beyond his years and his music reflects his trials, tribulations and triumphs.

Equally important, IKE is currently riding high with his latest mixtaped called “The Trendsetter Mixtape.” The dynamic wordsmith goes full throttle on the Mixtape. This street album is like an “Action Film” on wax. If you’re a fan of hard beats and lyrical bars, then this top notch mixtape is for you. “The Trendsetter Mixtape” is a captivating street album that moves pass generic trap tales and takes the listener on a deeper and more introspective level. It’s an ambitious and driven effort from a gentleman who has lived and survived the gritty streets of NYC.

“The Trendsetter Mixtape” is a tour de force loaded with relentless beats and hard core lyrics. It captures the true essence of Hip Hop. There are catchy hooks, quality production and plenty of food for thought on the release. IKE gets straight to the point, telling his story how he sees fit, and he does it unapologetically. His skillful lyrics and witty metaphors paint precise pictures.

IKE is not afraid to be himself and he incorporates many of his life’s experiences into his music. The mixtape includes 11 explosive tracks. Each song stands out in its own right and all of the beats are industry beats. “My favorite cut on the mixtape is the ‘Self Righteous Freestyle.’ We shot the visual for that down in the city off of the west side highway,” raves the rapper. IKE has put his stamp on the independent Rap game through his laid-back confidence and boastful attitude. It’s only a matter of time before IKE’s fearless authentic sound rejuvenates hip-hop.