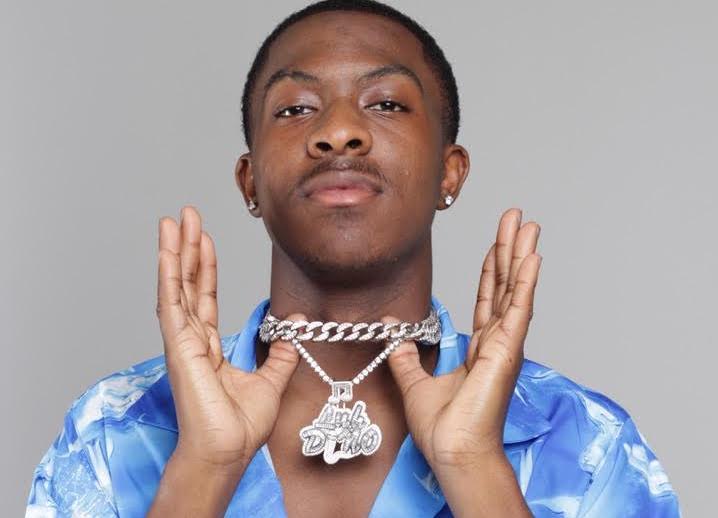 Today Atlanta bred rapper Luh Dino releases his highly anticipated projectUp4Life 2.0.  The young upstart, who is an alumnus of Atlanta’s renowned Westlake High School, has quickly developed a viral following in Atlanta and the surrounding areas while remaining independent.

With COVID-19 taking over, Luh Dino hasn’t been on tour lately, but that hasn’t stopped him connecting with the fans via music videos and social media to keep them entertained.

The step back from touring is a change of pace for Luh Dino, who prior to COVID-19 performed at the Streetz 94.5 show, joined a college tour with Toosii, Jackboy and Bankroll Freddy and opened up at spot dates for Megan thee Stallion, Yo Gotti, YFN Lucci, 2Chainz, Moneybagg Yo, Skooly, Trouble, Boosie and LightSkinKeisha. All of that in just a short two year career, but Luh Dino knows he can’t stop now.

“I’m rocking out the rest of the Summer, I’m just dropping music. July 3rd I’m dropping my album called, Up4Life 2.0.. Then I’m gonna just keep shooting videos for the project and make sure I keep the fans entertained. When this album drops I’m gonna go hard. The fans know that it’s coming, I warmed them up with it a few weeks ago on IG,” Luh Dino said. “The first single was called Ratchet Named Mimi that dropped in February, then I dropped My Heart, then Trapstar, then Dolce and True Colors. So I’m staying busy with COVID and everything going on,” Luh Dino said.

Releasing music video after music video, Luh Dino hits fans with well thought out visuals that bring the listener into his world.

“With my music videos I try to paint a picture of the song’s story. I want people to watch the video a few times and take something from it. Like with Tru Story, it’s telling a story of a guy in poverty and his big homie got killed and years later he runs into the guys that killed his big homie. He questions whether or not he should kill them and he’s got the guilty and innocent conscience.  Sometimes I just shoot the video on the fly and we don’t plan anything but we’ve gotten a great response from the videos and I feel blessed to get that kind of response.”

Continuing to work on his craft after picking up the ability to rhyme with some friends in the studio, Luh Dino is a self-sufficient artist who has the ability to record, engineer, mix and master his own music without any one’s help.

“I started making music like two years ago in 2018 with this song called “Movin”. My friend had been inviting me to the studio, and the way he was saying something, I didn’t like the way he was saying so I rapped it and everyone that was in the studio liked it and thought I had a good voice. That night I got home, I wrote a song and was just singing the melody and recorded it later that week. I was so anxious to release the music and I just dropped it with my friends and it did like 20k in a week on Soundcloud. I made the song in March and released it around Spring Break.

From there Luh Dino began recording more music and while taking a trip to New York, the Mecca of Hip-Hop, where he spent several weeks in the studio recording over a dozen songs.

“I was in New York for like two weeks, visiting my dad and after we met a guy that ran a studio at a party, I kept recording and I made like 24 songs. I was locked in the studio. I never wanted to be a rapper, I never decided I was a rapper. I made a logo for the brand but that was just for me, it wasn’t for music.  Then I just started sending music out to people and when I went back to school in August the whole school knew the song at a Pep Rally. From there I just started releasing more and more music and it’s been going up from there.”

Spending the past few years in the studio Luh Dino prides himself on being self-sufficient outside of help from his Aunt, Lady B, who already has guided the development of several artists that eventually signed major deals.

“I make my own music, when I tell executives that they understand I can do it all. I can mix, master, record and engineer myself without help. I like going to the studios, but after my auntie started spending a lot of money on me for studio time and all that, we realized we were spending way too much time and money in the studio at Patchwork. So we had to build our own studio, she bought the equipment and I learned everything on my own. I’ve never had a coach, the only one I had help from was from Lady B. My aunt, we don’t even tell people that much but she’s my blood auntie, my manager and she helps me with everything. That’s my momma’s twin sister so I know her intentions are good,” Luh Dino said.   “It’s my job to make sure we outta here. I ain’t even really rapping for myself. I’m rapping for my momma, my auntie, I’m rapping to open up doors for my whole family, my sister with her hair company. I’m rapping for everybody but myself.”