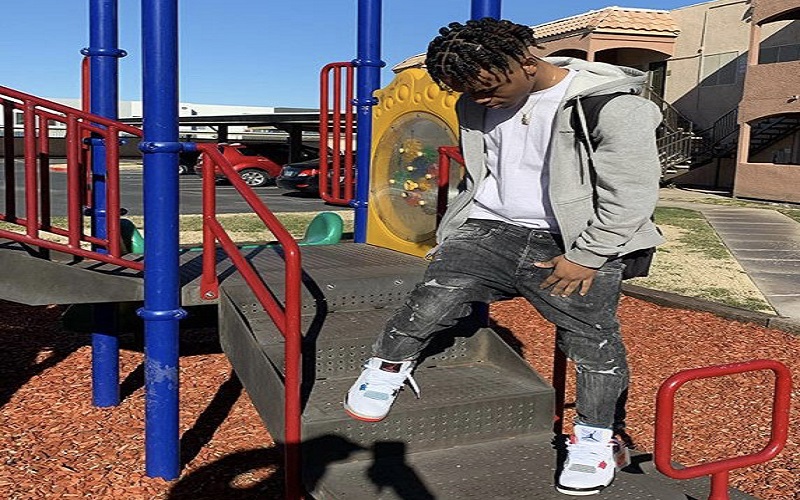 02 Jay-Money hails from Las Vegas, but he repped California for a couple of years when he was younger. The 17-year-old artist was born on August 15, 2002, hence the 02 in his stage name. As a young’n Jay always has a little money and stayed fresh because he was a young hustler. Eventually, 02 started breaking into houses, and stealing from tourists and robbing young drug dealers as well  Before taking rapping seriously he used to sing. He started taking rap more seriously because he saw his brothers were doing it and he was bored watching them do it alone. Jay has only been rapping for 11 months.

His first time getting locked up he was 15 years old, and he’s currently on probation for a robbery case that he caught with his brother. He took the case to trial and got off with probation. He will be released off of probation in September of 2020. He was discovered by Atlanta based record label P4P Entertainment through one of his friends Big Zo from Louisiana. Check out the interview with 02 Jay-Money below.

My earliest memory of hip hop culture would be YMCMB, when they were running the industry.

Where are you from and what’s the story behind your rap name?

Growing up, what kind of music was played in your household, and how has it influenced the music you create?

Growing up my dad played E-40 a lot. I wouldn’t say it influenced the music I make but I did mess with E-40 while I was younger.

Tell us about your neighborhood growing up and how it influenced you?

My neighborhood growing up was a bad place or either I was just around bad people.  We didn’t have the stuff other people our age had, so we would steal/stain, etc. Everything I went through influenced me to rap.

I know you just came home from doing some time, how long were you down for, and for what?

Yea I came home in October, although I only did a week in juvie, I took my case to trial and the outcome was me having to be on probation for 9 months. The charges I was facing were robbery, battery, and conspiracy of robbery.

What made you want to give up the street life to become a rapper?

Who are your top two lyrical influences in Hip Hop?

My top two would have to be Gunna and Lil Wayne. I have way more tho.

What, if anything do you borrow from those artists?

I don’t really borrow anything from them but I guess you could say I try to be as lyrical as them.

What are your thoughts on your city’s current hip-hop scene?

I think Vegas could do way better then what we are doing right now with the music, but it’s not really someone who put on for us yet, but I feel like it’s a lot of talent out here for sure.

What sacrifices have you made or things that you had to go without because you’ve invested in your music?

One sacrifice I had to make was cutting people off because I felt they weren’t showing the support they could have or should have been showing.

As a hip-hop artist, what do you feel your responsibility is to the hip-hop culture?

I feel my responsibility for the hip-hop culture is to prove that you can make it no matter where you come from and no matter what you’ve been through.

What is the most recent project,  single and visual that you are pushing now?

I still have not put out a project. But my most recent single is the “1030 FREESTYLE” out now on SoundCloud. And I’m currently working on getting my first visual done.

What do you want people to get from your music?

I want people to be turnt while listening to my music and vibe to it. But I want it to be for everyone, not just a specific group.

Where can the readers support you and your music online and via social media?