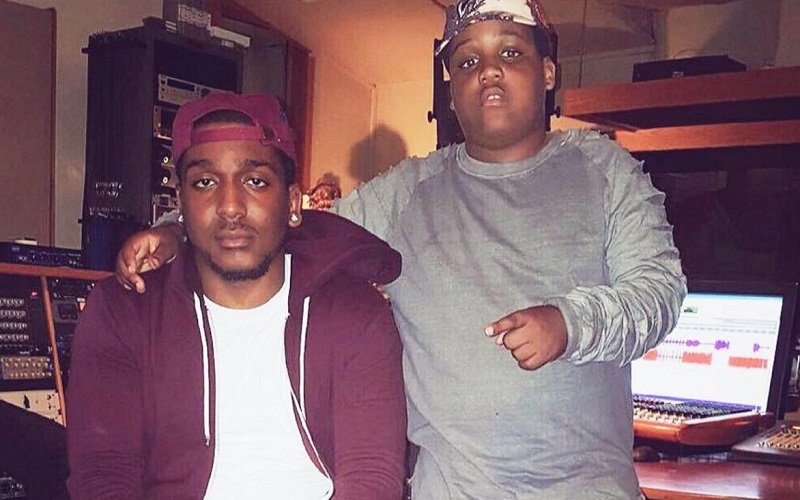 Millions of people make video clips every day of their antics hoping to go viral and become the next American superstar. Well, E-Class and Young Poppa did the same thing. The difference is that their talent is not a joke or a gimmick. It’s a natural gift. They rap and they are nice at it. They are so nice that after only 4 parts of their In The Whip series, where they can be seen trading bars back and forth in the front seats of their mother’s car, that they’ve amassed over 3 million views on YouTube. Their latest part to the series also showcases a heavy co-sign and some swapping of the bars with two of the best bar spitting legends in the game in Jadakiss and Styles P.

11-year-old Young Poppa and his 19-year-old brother E-Class grew up in Ellenville NY which is about 90 minutes from The Big Apple in a household that was rich with Hip Hop flavor served raw by their mom Tiffany. Well, the love of the culture has paid off because her boys learned the culture and have been perfecting their craft for several years now.  They’ve been courted by record labels and their stock is sure rising to a new level. They will soon release their Family Business project and for them, it is all family business being they their mom is their manager.

Tent TV’s got you covered with this exclusive interview from the Ellenville duo. With bars and the love for the game that they have, and of course the cosign’s of the industry greats, there’s no stopping in sight for E-Class and Young Poppa collectively known as The Hoodies. The Hoodies is the moniker that they chose because of the senseless violence being washed over on Black male youths when they are targeted as criminals for wearing hoodies. The name is a full tribute to Trayvon Martin and others who have been forced to succumb to the violence due to this ongoing issue of police violence based on appearance

So sit back, relax and take a ride in the whip with us as we kick it with The Hoodies.

Please tell our readers a little bit about your history as aspiring artists.

Well me and my brother have been rapping for a long time now. Since I (E-Class) was about 9/10 years old I wanted to be called one of the greatest of all time and I still want to be, and I won’t stop till I’m recognized as such. Young Poppa is a monster in the works ha ha !! Give him a short amount of time and he’s going to take the game by storm!

Being from Ellenville NY what are the differences or similarities in your town as opposed to the big city of NY when it comes to Hip Hop?

Hip-Hop has a heavy influence where I’m from. Ellenville is a small town but we’re about an hour and a half outside NYC. We are real in tune with what the city is up too.

Growing up in a household where your Mom/Manager listened to classic Hip Hop like Eric B & Rakim, EPMD, LL Cool J, Nas, DMX, Biggie, Jay-Z and 50 Cent what artist was your first introduction to Hip Hop that made you want to rap?

For me (E-Class) it was hands down Pac, Jadakiss, and Nas that made me want to rap. I listen to them every single day and there’s probably not one song I don’t know by them. (Young Poppa) for me, it was 50 Cent, Biggie, and Pac. I listen to new rappers too but old school Rap is my favorite.

You’ve both been rapping since an early age so when was the turning point that you decided to form the group The Hoodies?

When we saw the youth being targeted because they wore hoodies we decided to stand up and represent something that was looked at negatively and turn it into something positive. All of the youth are my hoodies.

You guys have racked up over 3 million views for your, In The Whip series and have recently been seen taking trading bars with the likes of the OG’s Jadakiss and Styles P. What inspired the In The Whip Series?

In The Whip came from me and my brother recording freestyles in my mom’s car, we just came up with the name and idea. Shout out to Kiss and SP those are the big homies for sure!

How are you adapting to the new fame?

It’s still new to us. We could be at a mall or restaurant and people run up to us or point at us so it’s weird but dope.

Have there been any major labels seeking you guys out for deals?

Yeah, we have gotten a few offers.

Being that you were raised with knowledge of the history of Hip Hop how important is it to you to carry on the legacy that preserves the culture in your music?

It’s the most important thing about music to me! Respecting the culture and knowing where it all started is mandatory. Making sure it lives on is even more important. Even if you have that new sound (Trap Rap, Pop Rap) and want to make your new wave, just pay homage to the people who laid the ground work down for you to have an outlet to put your music out. The game is in great hands if given to me and Poppa I can assure you that!

Who are some artists and producers that you’d like to work with in the future?

Why did you choose the name The Hoodies for your group?

We chose the name the Hoodies when Trayvon Martin was killed.  Me and my little bro identified with that so much because we are young men who wear that same piece of clothing. We wanted to start a MOVEMENT that puts a positive spin on such a negative stigma. Hopefully we can meet the parents of Trayvon one day!

I know you’re working on the Family Business project. Are there any special features that we should look out for on the project?

That’s extremely confidential ha ha you won’t be disappointed I can assure that!

What’s up next for you guys besides the project that you’re releasing? Shows Videos, endeavors outside of music etc.?

We will keep the fans updated on all of our social media pages with what moves we are making. I promise we will bring Grade-A and nothing less

This question is for Mom.  How happy are you now that your sons are one step closer to making their dreams a reality and how important is it to you that they represent themselves as well as the culture of Hip Hop properly through their music?

To watch my sons live out their dream and to be doing it together is a dream come true for me. Hip Hop raised me, I am a part of the culture. I dabbled in a few bars myself  lol. I battle with them for fun but my boys are the true stars.
Where can the public follow you guys on social media?