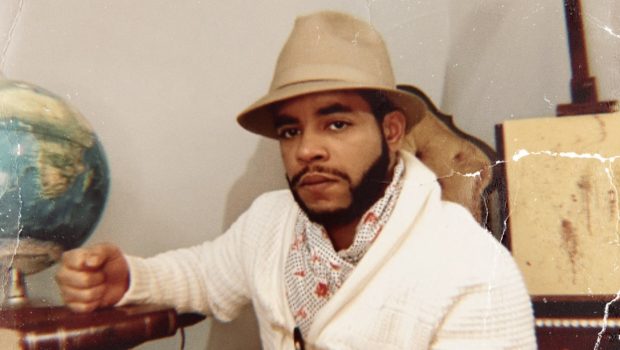 The last time Vaughn Davis graced us with a full length project was January 31st 2018. In an age of transitory attention-spans 4 years can be viewed as a risky hiatus for a relatively fresh face to the music scene. However, with his third album Wisdom Is Rich Vaughn completely erases any assumptions of losing a step by kicking down the door, while asserting himself as a permanent Hip Hop contributor. If you’re unfamiliar with Vaughn Davis — He is one third of the emerging music collective DoubleCrown Inc. alongside Keion Jevon & Khaleel Mandel. With Mandel being said collective’s Founder, Additionally Davis holds the title of Co-Founder. Over the past four plus years Vaughn played the role of Executive Producer for selected DoubleCrown albums, such as Khaleel’s Philharmonic. Fast forward to Juneteenth / Father’s Day 2022 Mr. Davis has again stepped into the light with his most groundbreaking and triumphant masterpiece to date.

On The opening track ‘Hello Model’ an unidentified voice says accompanied by syncopated echos “We got to do this, all I wanna do I tell you, we got to do this”. A phrase that sets the stage perfectly for what should be expected from these 12 songs; A whole lot of action. During the intro Vaughn tells the story of a woman taking initiative in a flirtatious discussion over a beat that’s a profoundly updated approach to New Jack Swing. With Davis name dropping our 90s icons Pam, Gina, & Sade — Said intro does a fantastic job at serving a fresh mixture of nosatliga and modern day. Wisdom Is Rich has an interwoven France Theme, notably shown with the amount of French speaking women on the album’s first half. The French titled song ‘Couronne Supérieure’ in English translating to ‘Crown Superior, features female vocalist/DoubleCrown affiliate Amber. The silky celestial sung melodies by Amber are an album highlight because her voice is akin to a key ingredient for any dish at the French restaurant, Deux Amis. It is especially at this point in the LP that shows Vaughn is about as well traveled as you would hope to be by the age of 32. He goes from speaking of chance meetings overseas with foreign bosses sporting “black diamonds and leather Italian loafers”, to emphasizing life’s simplicity “walked the stoney path to the river, Sinatra was right / London streets by night looking like they made of gold”.

On ‘Her Said’ Vaughn is not only backed up by vocal harmonies from DoubleCrown members, but flashy drum patterns and a compound of prestigious synths leaving us visualizing Retrowave pictures. It’s a complete left turn from anything Davis has executed on previous efforts. One theme gathered from each listen is never underestimating an underdog. As ‘Sha’Carri’ is not only a full dedication to the track star, but an emphasis on highly capable individuals who are foolishly disregarded. At the same time this song serves another accomplishment for Sha’Carri Richardson since she finally has a full anthem in her honor, and an anthem that’s overall sonically motivating. I remember a recent tweet that was from a thread titled “10 mindsets I wish I had in my 20s” and The tweet stated “Most people don’t grow wiser. They live the same year over and over until they die”. Joined by a raspy voice feature from Vaughn’s childhood friend Mike and a cameo from Khaleel Mandel, the title track “Wisdom Is Rich” epitomizes everything opposite of the aforementioned tweet. “Stimulate my mind eye, rich in my dna / multiple like lax defeat beasts of the sea” the rate of variety Vaughn presents in his flows throughout this title track alone is what only a master at rapping can achieve. What’s most undeniable, Vaughn is not lazy when it comes to figuring out new flows.

It is at halfway through the twelve tracks on Wisdom Is Rich where we have a much clearer sense of Vaughn’s head is at these days. On the ninja warrior bounce “The Zenith” he affirms ‘Divine right to rule so deep like them cellos / never chasing ghosts toast to the most, He high’ — further revealing that the nucleus of this album is Davis’s permanent identification as a Black Hebrew Israelite. “Book of Judah Maccabees / when we pray together, make the earth, wind and fire move “ — “ Changed up the diet, started celebrating High Holy Days/ no more pagan past-times” Vaughn shares proudly on the final verse of the hard-knocking ‘R.A.T’. This tenth song begins with a slowed down version of a song named ‘Armed & Dangerous’ by Vaughn’s father Bronco Slay. It is on said song where most explicitly Vaughn picks apart wicked entities like how a wise war general would. For as many uncomfortable truths via Davis’s words, on ‘R.A.T.’ whether he’s explaining attempts on his life or the constant dark clouds he as a black man personally is under, in Vaughn’s voice you hear how he’s at immense peace while underscoring these topics. Failure to repair a broken relationship can act as a reason to not be at peace in life. Davis’s revelation of he & his father repairing their own relationship throughout the years is one drawn conclusion as to why Vaughn sounds so naturally centered on every song. For as much of a standalone artist Davis is, he makes it a point to assert his reverence for DoubleCrown’s other Founder ‘K three plaques / Closed the Book then Ida hit’.

Vaughn says this LP’s solo producer Khaleel Mandel is a ‘ghost throughout the album, because his presence is felt on each song’. While Khaleel provides vocals to verses on the intro, the hook to the fourth song and one of his greatest rap verses yet on the album’s standout ‘Big 3’ — It’s his understanding of Vaughn’s vocal cadences and musical choices that reminds us the difference in an album’s cohesion, when the credits read one MC & one Producer. Vaughn raps on his verse for ‘Big 3’ “Shaq daddy backboard / break them dominate Iso”. Vaughn and Khaleel’s musical chemistry and execution definitely has an essence 2000-2003 Kobe/Shaq would probably be proud of. Khaleel has shown over the past 5 years how he’s a chameleon composer, but it is on this album where he jumps to a creative leap I don’t think he even knew was possible for himself. On all 12 records the multi-instrumentalist gives Vaughn musical backdrops that contain every style except hard rock & country music; And even then I’m sure a musicologist could find nuances of those supposed missing genres in a song or two. Mandel’s ability to make vocal samples from scratch is second to none. Whether it’s with Amber’s voice, or on the album outro ‘400 Up’ where a choir of children sing a refrain containing the name ‘Yahweh’. After multiple listens of this album, already I would say Khaleel Mandel has earned the title of a ‘Producer Of The Year Contender’. Whether he’s nominated in that category on this website’s annual award ceremony, or elsewhere, anticipate to see him in consideration with other elite producers.

Wisdom Is Rich is a spellbinding painting of childhood flashbacks, firm rooted progressive beliefs, bright futures, holding yourself accountable & a solid breakdown of what it means to even have/keep your wisdom. The album’s rich features from Keion Jevon on ‘Big 3’ & Kenn on ‘400 Up’ also give a nice homage to the baritone section. For as hard as it may be to embrace the practices of Hebrew Israelites Vaughn Davis has made an album showing those of that religion are far more relatable than some may give them credit for. Vaughn & Khaleel seemed to have coined a new term describing this album as ‘Hebrew Hip Hop’. Ultimately this album is Davis’s magnum opus and whether cult, sleeper or mainstream is the first word of its description, the following word will be classic. Despite whatever hard fought battles preceded the making of this album it makes for a pure story — Because as Vaughn puts it ‘Dream of trees fruits of every color / Even the wicked blush, Only pure love can make an Earth be clean’.