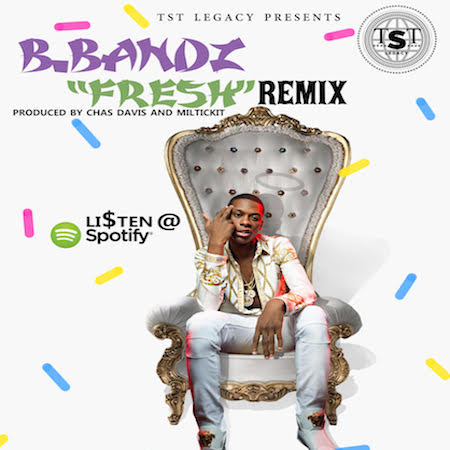 Seventeen year old rising talent B. Bandz is a Chicago native, currently living in Atlanta and Los Angeles, CA. Lately the young talent is drawing attention after being featured on Jermaine Dupree’s The Rap Game Tour and show. Now After a video release with Russell Simmons and All Def Digital, the young talent drops a remix to his “Fresh” single produced by Chas Davis and MilTickit. While B. Bandz is 6’1 and a true basketball star at heart, he’s also a self proclaimed superstar in the studio and on stage. B. Bandz hopes to that translates to being a able to represent a new era of hiphop as the Fresh Prince of the new era.

In addition B. Bandz recently recorded a whole mixtape with Nia’k and B. Bandz and also recently hosted the Teenage NewYears Eve Bash @ The Pink Hotel with Miss Mulatto. There’s no question B. Bandz has been very busy and he parties, but he’s clean cut, and doesn’t smoke so B. Bandz believes he is “a great spokesman for all teens and people in general” and hopes to be a great role model for the future of Hip-Hop.