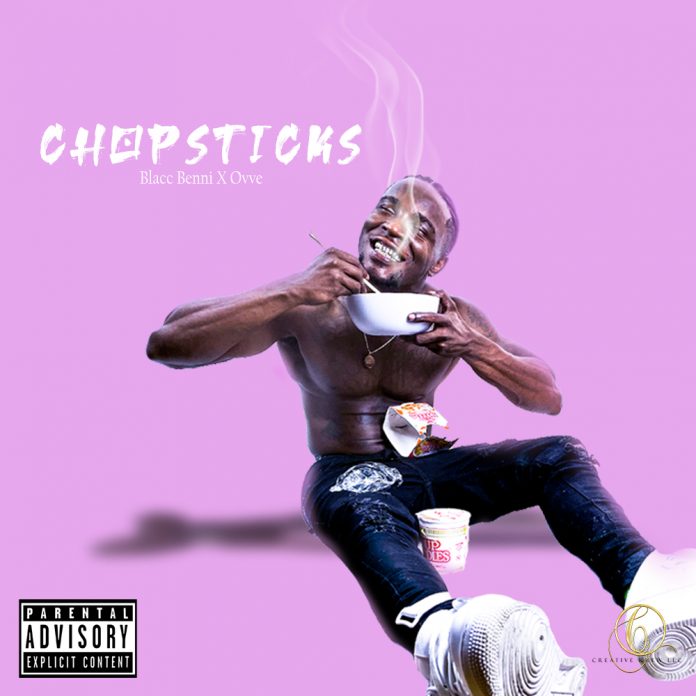 Reading the title of this song, the listener might believe this song is about food.
Not necessarily. Blacc Benni comes in hot with his latest single produced by
Ovve, “Chopsticks”, bragging about having protection on him due to his paranoia.
The paranoia is due to the fact that Blacc Benni has jealous foes and ‘ ‘pocket
watchers’ ‘ because of his success making money that he cannot reveal too
much about on a track.

With his “chopstick” by his side and homies that are down to unload a clip at his
opponents, Blacc Benni comes onto this song with the charisma and energy that
can only match how he feels about being ready at any moment’s notice. Other
subjects such as having to brush off hoes and COVID-19 being referenced in this
song are just a glimpse into the life of Blacc Benni and his everyday hustle.

Hailing from Wrightsville, Georgia, about 2 hours away from Atlanta, Black Benni
has been hustling as a rapper since he was 13, the age when he released his
first single. Since then, Blacc Benni has opened concerts for artists such as Lil
Wayne, 21 Savage, Paul Wall, Zro, and Kirko Bangz.

Pushing the boundaries of auto-tune over immaculate beats, Blacc Benni is
continuously discovering intriguingly melodic ways to tell his story and his hustle
through his music. Songs like “Novacane” and “MacGyver” push forward the
narrative of Blacc Benni’s struggles and ascension through living in the hood.
With his heart on his sleeve, Blacc Benni is always prepared to tell his side of the
story in a song and to tell it like it is. Whether it be his pain or his successes.
Blacc Benni and his brother own and run “Creative Krew Studio” in Abilene,
Texas to support and help other artists tell their story just as he has.