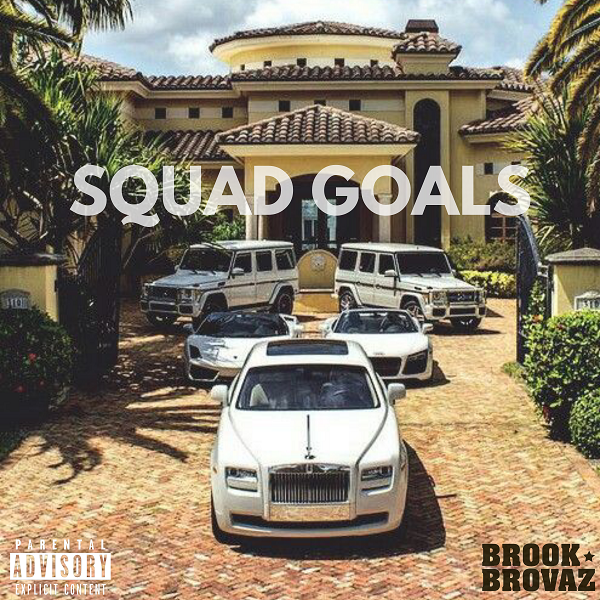 New album, “A Brooklyn Summer” is destined to warm up listeners to composing artist duo, The Brook Brovaz

BROOKLYN, NY – Silver and Shak-Trauma (the duo who make up “The Brook Brovaz”) are best known for their behind the scenes magic. Working with upcoming, multi-platinum and Grammy award winning artists, these established producers also compose music featured in film, television, advertising and video games. Emerging from an eight year stint with their highly successful recording studio, The Brook Brovaz are stepping into the limelight with the release of their debut album, “A Brooklyn Summer.”

Paying homage to their home borough, The Brook Brovaz (an abbreviation of “Brooklyn brothers”) delivers a bit of Caribbean influenced Tropical Pop, Hard Rap music and Trap on the 8 song collection. Coming from a diverse district where everything from Reggaeton to Rap can be heard blaring from car windows, “A Brooklyn Summer” portrays the musical feeling of a sizzling summer in Brooklyn.

The Brook Brovaz’s album flaunts their ability to create music in several genres, showcasing the versatility of the well versed and musically articulate artists. The lead single, “Squad Goals” is a hard hitting Trap club anthem about unity, triumph and wanting success for yourself and the people around you. Tracks such as the slow R&B Trap vibe, “Top Down” and the slick talking, commercial trap track, “Who Got My Money” are already massive hits on major digital platforms.

Another standout song, “Bad Bih,” is the center of plans for a Women’s Month challenge. Designed to show women in their element, the “Bad Bih” challenge will offer a cash prize for the best video showing what makes the entrants a “Bad Bih.”

The success of “A Brooklyn Summer” is inevitable. Already flourishing as music industry pros, The Brook Brovaz and their manager, Cloé Luv, run the Brook Brovaz music production company, and operated an acclaimed recording studio for around eight years. Well known artists and high profile projects emerged from that studio, including A&E’s documentary “Biggie: The Life of Notorious B.I.G.” and the special premiere of the Faith Evans album, “The King & I.”

The triple threat of being able to write, produce and perform keeps The Brook Brovaz in high demand. The team works with a range of music publishers in the US and abroad. Their expertise makes it possible for them to collaborate on a host of worldwide genres, from EDM for Germany to Afro-pop beats for Africa! Realizing that music is a part of everything, they are able to create whenever they are called upon. “Their level of creativity is one of the best of this generation,” said manager, Cloé Luv. “They understand music in a way that a lot of people do not. The Brook Brovaz are composing artists who can execute at the same level, be it as artists, or as songwriters, or when working with licensing agents.”

“A Brooklyn Summer” is a dazzling project showcasing another part of their natural talents, and there is more to come. The Brook Brovaz just finished a catalog of action-packed music for a film publisher and their next venture is a large crossover project titled “The Producer’s Perspective.” Featuring some unique combinations – from Country mixed with Trap to EDM mixed with Rock and Roll – the project promises to be extraordinary. The Brook Brovaz will be sharing their perspective on how music should sound. Considering their extensive and varied music industry experience, we should all listen.

To listen to The Brook Brovaz or to follow them on social media, please visit: