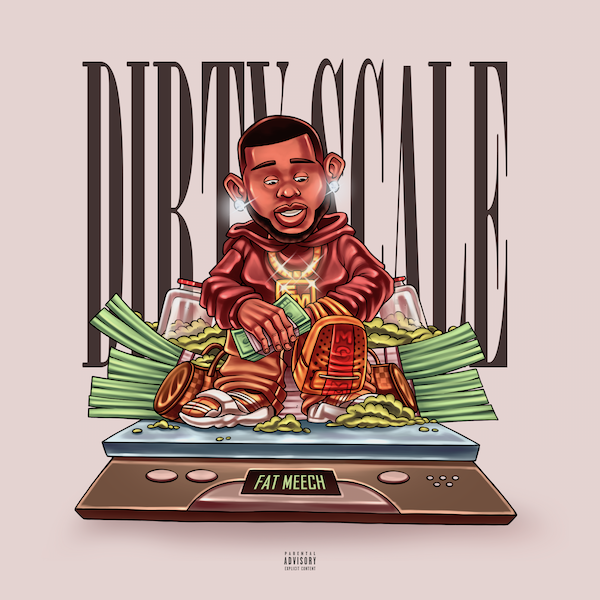 Recently Fat Meech delivered the streets a new single titled, “Dirty Scale.” The single is the most recent in a slew of hits by the South Central based rapper, who has continued to deliver song after song for the fans amidst a worldwide pandemic.

“Dirty Scale has a lot of harmonizing and doo-wop on the track. It’s about me coming up off hustling in the streets – I don’t care if you used a scale or if you were seamstress, it’s about making something out of nothing. I really had nothing, I had my own marketing and my own hustles and grind and I think people should be able to relate to that. I was lost at one point but I don’t want to lose that feeling and feel like; What am I going to do tomorrow? I’m focused on music and hustling”

Having had success on over 50 websites across the globe in recent weeks, Fat Meech is gaining the attention of the media after turning away from the streets.  Now a star in the making and known through out the small world of Hip-Hop by the likes of Blueface and others,  this LA talent has a story to sing and he’s getting A LOT of ears.

“Music gives me more a direction and makes me think more about taking entertainment seriously as a profession. It’s motivation to see people tapping in with me,” Fat Meech said. “I keep getting the whole West Coast Rod Wave thing. I’m like where are y’all getting this from?! I fuck with Rod Wave, it’s a real positive thing to me because it’s like I’m trying to do that. Big shout out to DJ Hed at 92.3 for shouting me out during the Rod Wave interview. But yeah it’s crazy to get this kind of response and I truly appreciate the love the streets have shown me.”

Not only has Fat Meech been giving the fans music, but Fat Meech has also been finding ways to give back to the less fortunate in this time of need. Posted up with his his fiancé , Fat Meech and his wife to be clearly have fun on social media playing with the Meech’s followers and engaging with fans.

“To me someone who always wants to be better, they are always going to outshine the competition, because when you’re sleeping, I’m out with the flyers and trying to do what I can to build my brand. I’m hitting schools, throwing out my own money to gain fans and to show love back and to set myself apart from everyone else.I’m not backed by any label, that’s me! I’m trying to be better than basic and I show my life to my fans. When you really gain fans in real life, that really impact’s the algorithms online. I don’t want to forget what it’s like to be lost, so I hustle. To me I don’t ever want to lose that feeling of having that hunger to hustle.  Even if you’re sitting on $1 million, you gonna be trying to get to that $10 million,” Fat Meech said.