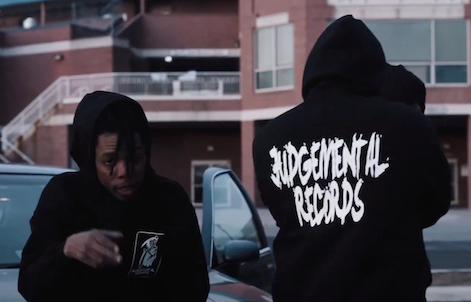 Today Delaware rapper GK releases the visual to his lead single “Picture” which is featured on his upcoming EP titled, Pain N Champagne. In the Housevisionz directed visual GK is posted up just off the I-95 with his labelmates and the founders of Judgemental Records Alonzo and Corey.

GK’s project Pain N Champagne is exclusively produced by Tone the Beat Bully, who is Jahlil Beats biological brother, a mentor to GK and a Grammy nominated producer for a host of artists including Drake, T.I. Wiz Khalifa, Meek Mill, French Montana, DJ Khaled and more.

“All the stuff I’m talking about I’m telling the truth, that’s the wave I’m on,” GK explained. “Its big working with Tone the Beat Bully because we had done a few projects and we had some tracks with Jahlil Beats back in the day, so that kind of opened the door for me to work with Tone. He’s been really helpful as far as helping me put together the EP. For him being a Grammy nominated producer and for me to be able to work with him, I really respect Tone and I really appreciate it. It’s big for me and I just really want the world to understand that.”

While the single is now available on all streaming platforms for fans, the visual releases today as the anticipation for GK’s Pain N Champagne EP continues to build up a buzz.

“This music is about having it good, then not having it good and differences of having both situations in your life. I’m bringing it straight ’em, those tracks are all produced by Beat Bully and we’ve just been going in the studio and working hard on our craft. He’s really been helping me with the business side of things and how the project should be released, ” GK explained.

Combining East Coast tempo with a down South flavor and demeanor, GK embodies the many aspects of Hip-Hop that today’s listeners have come to love from both rappers on the East Coast and in the South.

“I grew up in Maryland, in a small town and now living in Delaware in a city I see both the south and north perspectives having lived in a country environment and a city setting. I feel you need to have the up north tempo but you need to be able to talk ya shit and tell the truth like they do in the South. Thats what I try to do with my music because we are right in the middle of it all. Not quite New York, but not Atlanta either, just a little bit of both.”