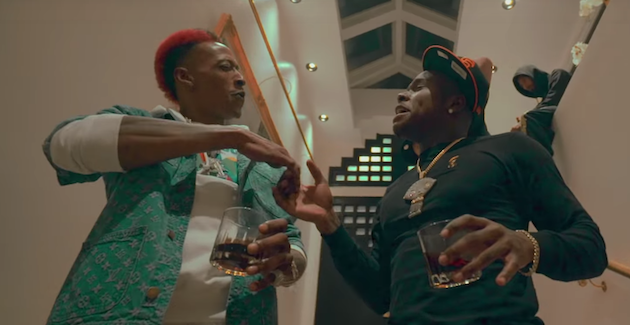 “My music is indescribable, that’s why I had to move to Dallas and I’m traveling to other spots because it wasn’t anyone in the town that could do it like me. I combined my experiences and everywhere I’ve traveled in my music. It’s Arkansas Phly, it’s some of that Arkansas flavor,” Succeed Phlyguy said.

As is the case in this visual, the Arkansas native and Dallas,Texas residing rapper has no problem grabbing the attention of the room when his raspy voice lets loose.

“I grew up in Ft. Smith, Arkansas and got going at a bunch of talent shows locally, just writing and recording. Then I ended up taking a chance when I turned 18, and I moved to Dallas and that’s where I signed my first record deal.” Succeed Phlyguy explained. “Dallas is like a Hip-Hop hub. A few years ago I wouldn’t have thought that you could go to Dallas and make a name for yourself, but there’s a lot of spots that’s 4-5 hours from there, and you can move there and really blow up. I don’t know if the whole rap industry knows that but there’s a lot of producers and hell of a lot of good artists.”

Joining forces with DaBaby, one of the most talked about rappers in Hip-Hop today, and rising rapper Stunna4Vegas, Succeed Phlyguy is gearing up for his project Foreign Affairs, due in the coming months. When asked how the song came about, Succeed explained that his son put him on to DaBaby.

“My son just sits in front of the computer and my son found out about him 6 months ago and he was just on to dude. I was like who is? And then situation at Wal-Mart happened when he shot the boy that tried to rob him. Then I saw he was in LA so I hit him on the live feed and he answered the message and I eventually coordinated with his manager. I drove all the way from Vegas, we got Stunna on the song, they booked the studio time and it only took like 20 min in the lab and we vibe out smoked a couple and then we shot the video the next day. We ended up finding out we dealt with some of the same people and then I actually got the feature about 40 days before he signed, so everything was perfect the way it worked out.”

Having filmed visuals all around the world from Dubai to the Bahamas, Succeed Phlyguy is truly a different kind of artist that Hip-Hop as yet to embrace and in the coming months he will be releasing videos so fans can see it all.